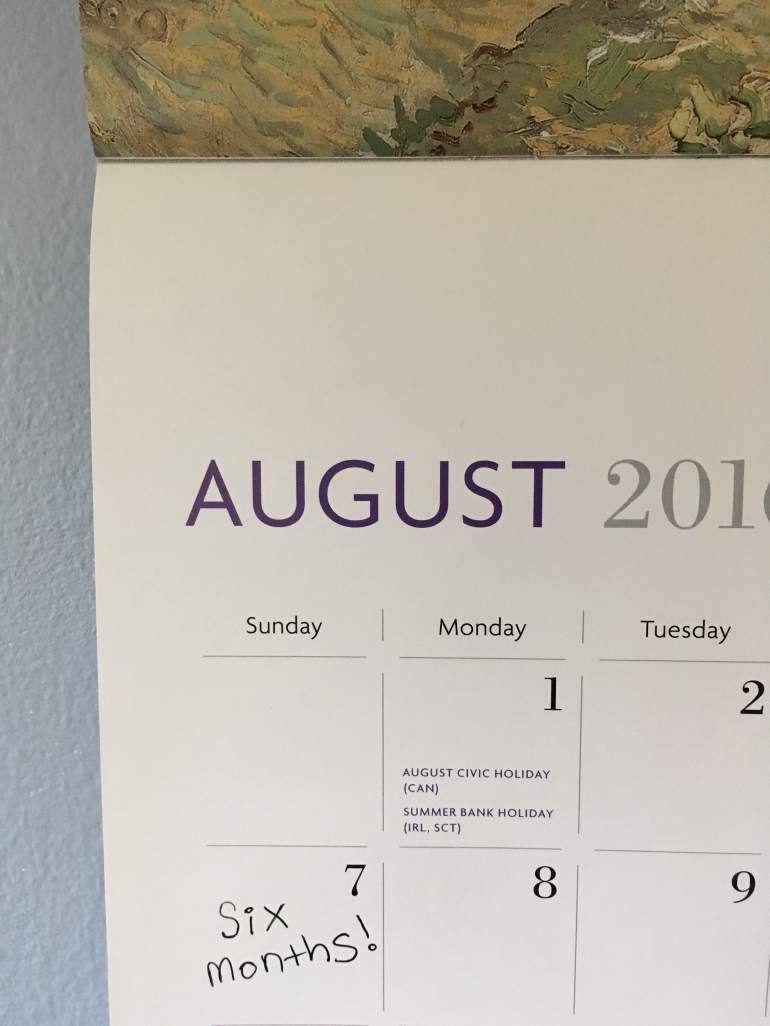 Today marks the six-month mark until The Possessions comes into the world. At the end of last month, I passed a one-year anniversary: a July day that, in 2015, was both completely ordinary (waiting next to my phone, trying to distract myself with bad TV) and completely surreal (learning that my book had officially sold). And now it’s only half that time until I could, feasibly, walk into a library or bookstore and spot my own cover sharing space with the others.

Sometimes, six months feels like such a brief, barely-there wait that I could be marking the hours until tomorrow morning. Other times, it feels like such an impossibly long time that my book could be launching in 2067.

I’m caught in a lull now: the nail-biting frenzy of revision trickled down to last-minute polishing and proofreading, and now even that much is largely out of my hands. Right now, I’m mostly in a place where I can relax and enjoy the occasional good news: I’ve been thrilled to learn about my book coming out in different countries, being translated into different languages. I saw the gorgeous, haunting cover concept for the edition that British and Australian readers will be picking up. It was a reminder that the same words will be interpreted in a thousand different ways by readers, each one carrying away a slightly different atmosphere, tone, impression.

I have moments of anxiety attached to this six-month countdown, though talking about anxiety related to your debut book launch feels a little strange or inappropriate — this whole thing is so lucky, so amazing, so unlikely, that there shouldn’t be any room for doubt or negativity. And in many ways, that’s true. Still, there’s a vulnerability to being a first-time novelist. All that work in private, and by the time it reaches its end goal, you have no idea whether people will love it or not, what you’ve done well, what you should have done better. It’s like the light traveling from a star. Letting go of that control, after years of pouring private hopes into a project — it’s a tricky sensation to get used to.

But one of my clearest memories from the publishing journey came very early on. It was during my submission period, when I’d had a wonderful, dreamy phone call with an editor, and later that day I went to the St. Louis Zoo with my family. I walked around half-distracted by this glowing sense of possibility, everything lit up with a secret knowledge: my book might come into the world! My book might be in bookstores, in libraries, a physical presence that any one of these fellow sunscreen-blotted zoo-goers might be interested in reading.

In the intervening year, I’ve had a lot of surprising, humbling successes with the book, but I’ve also had moments of uncertainty, disappointment, second-guessing, trepidation. My main wish for the next six months is that I learn how to go back to that moment in July of 2015 that was buoyant with amazement and gratitude, and to keep that at the forefront of my mind through everything. To push aside my naturally grumpy and neurotic tendencies and let the pure corniness of that moment — My book might come into the world! — carry me through, on to the next book, on to the debut of this one.