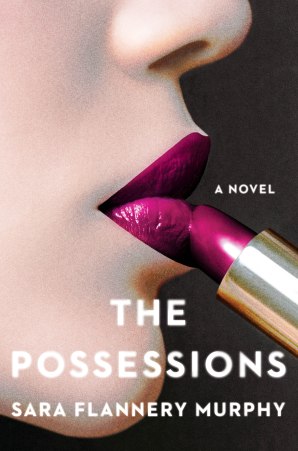 The Possessions is available through Harper/HarperCollins in the U.S., and by Scribe in the U.K. and Australia.

“Sublime … a complex novel that is both unforgettable and impossible to put down.” – Booklist starred review

“Murphy’s imaginative debut is a haunting ghost story and a thrilling mystery that will engross readers until the final page.” – Library Journal starred review

The Elysian Society is an underground organization where grieving clients reconnect with lost loved ones. The employees, known as bodies, spend their days in a numb routine as they channel the dead. Edie has worked at the Elysian Society for five years. She’s a loyal employee, turning blankness into an art form. When she takes on an enigmatic new client, her quiet life cracks open.

As Edie grows closer to Patrick Braddock, moving deeper into his life, she learns unsettling details about the death of his wife, Sylvia. Strangers start to seem familiar; memories leak into waking life. Edie can’t tell whether this is Sylvia’s growing influence or her own walls breaking down. Secrets are circling closer, threatening the precarious balance that Patrick and Edie have created.

Internationally, look for The Possessions from Harper/HarperCollins in the US, Scribe in the U.K. and Australia, De Fontein in the Netherlands, HarperCollins Brazil in Brazil, 20/20 Editora in Portugal, and Hans Media in South Korea.

– Advance Praise for The Possessions–

“I was totally immersed in the strange, beautiful world of Sara Flannery Murphy’s The Possessions. A gripping, chilling read that’s part love story, part mystery, and completely original, it’s sensuous, scary, and utterly thrilling. I’ve never read anything quite like it.” — Anton DiSclafani, author of The After Party

“The Possessions might be the most affecting, riveting novel about love and obsession I’ve read in a decade. Sara Flannery Murphy possesses the dystopian imagination of Margaret Atwood and the keen feminist incisiveness of Heidi Julavits, but the haunting, seductive prose is all her own. This is a literary ghost story for a whole new generation.” — Christopher Bollen, author of Orient

“An enthralling meditation on grief and memory cloaked in suspenseful psychodrama, The Possessions dissolves the boundaries of past and present and artfully, heartbreakingly maps the consequences of transgressive desire. Sara Flannery Murphy has written the best kind of ghost story.” — Robin Wasserman, author of Girls on Fire

“Sara Flannery Murphy casts a spell as devilish and dazzling as the language she uses to cast it. Once you enter the erotically charged, psychologically gripping world of her debut novel, The Possessions, there is, truly, no going back or getting out.” — Kathryn Davis, author of Duplex

“As well as being a supernatural tale, brilliantly evoking a time not quite our own but almost, The Possessions is a meditation on love, obsession and grief.  In an almost Kafka-esque world, Sara Flannery Murphy’s subtle, spare and poised writing creates a gripping sense of threat that makes the book compelling reading.” – Lucy Jago, author of Montacute House

“A literary descendant of the iconic novels Rebecca and Never Let Me Go, Sara Flannery Murphy’s haunting, auspicious debut explores the enduring nature of grief and guilt and the myriad ways the uses of the body can stave off the loneliness of the soul.” — Helen Schulman, author of This Beautiful Life